Lullabies for a Good Night 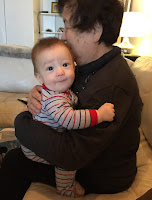 Tomoko’s daughter Beata is a new mother. Her son Kai was born May 11, 2017. Not surprisingly, Tomoko loves her grandson, and sings lullabies to him. “He likes Brahms,” Tomoko says.

Kia has good taste: Brahm’s lullaby is probably the most well known one, usually called “Cradle Song” – “Lullaby and goodnight, with roses bedight” (you can hear it at https://en.wikipedia.org/wiki/File:Lullaby_wound_up_clock_guten_abend_gute_nacht.ogg) . Published in 1868, the lullaby was dedicated to Brahms’ friend Bertha Faber to honor the birth of her second son.  Variations of that melody were woven into Brahms’ Symphony No. 2 in D major Opus 73 first movement.

Lullabies play an important role in young children’s development. The simple, repetitive melody helps little ones go to sleep. Lullabies are also an early form of communication; they are usually sung with emotion that conveys warmth and tenderness, and can hold a child’s undivided attention. The rhythm of lullabies also helps a child learn the rhythm of language.

Additionally, lullabies serve as a way to pass down societal traditions, and have been sung for centuries around the world. Tomoko and Beata sometimes sing Japanese lullabies together, bringing back memories when Beata herself was a baby. It's a lovely way to start a musical life.

Posted by Lesley Farmer at Wednesday, March 07, 2018 No comments: